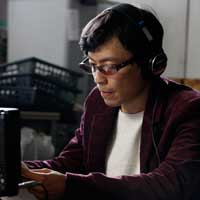 Tetsu Shiratori is Japan’s most famous spiritual film director, actor, and voice actor. For many years he acted as a film director while working as a voice actor of various television, theater, film, and animation. Tetsu always pursues the theme that is ahead of the times and has a reputation for its foresight. His movies include: “Stone Age”, “2006 Theater Open”, “Education of the Soul”, “Theatrical Open 2008”, “The Era of Inauguration”, “The Theater of 2010”, “Prayer ~ Dialogue with Something Great”, “Resuscitation”, and “Reading”, focusing on the life and times of famous American psychic Edgar Casey.

In October 2007, Tetsu was diagnosed with incurable brain cancer and his doctors only gave him a short time to live. When his friends found out that he had terminal cancer, they started praying for him, and he also started getting special Hado, or vibrational, treatments from Dr. Masaru Emoto in Tokyo, Japan. Within a few months the cancer in his brain completely disappeared and he realized the power of prayer.

One of his latest films, “Hopi: A Message from Ancient Times” Tetsu will describe Hopi belief systems and how we can live in peace and harmony on this beautiful planet. Ted and Tetsu  discuss the film on January 2. 2021. The film includes extensive interviews with Vernon Masayesva, a Hopi elder with the Hopi Black Mesa Trust, To watch a portion of the movie, please click HERE

Mr. Shiratori has made major appearances in the animation “Crayon Shinchan”, “Detective Conan”, “Sengoku BASARA”, “FULLMETAL ALCHEMIST” and “Animal Sentai Juuou” with Michael Jackson ‘s voice, as well as: “Gifts” (Echo Publishing) “The world will be united in prayer” (VOICE), “When praying” (VOICE), “To the resuscitation of the earth” (VOICE), “Major ten people who are at the cutting edge The important message “(Hikaru Land). “Pleiades – Messiah meager”, and Edgar Casey’s future reading “(Hikaru land).

He is also on the Japanese Cinema dream club nomination committee, and general manager the forest project, as well as Director of Heisei, and a full time lecturer of Avex, and representative of the Earth resuscitation project. Tetsu is President of the OFFICE TETSU SHIRATORI Co., Ltd., Tokyo, Japan.