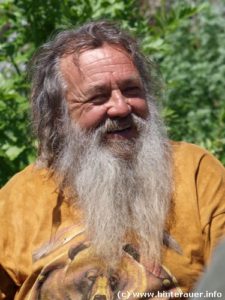 Wolf D. Storl is a cultural anthropologist and ethnobotanist. He is famous throughout Europe for his fascinating anthropological, scientific, and spiritual research into plants and their botanical, historical, and spiritual elements.

He has written some 25 books and many articles, which have been translated into many languages, including: The Herbal Lore of Wise Women and Wortcunners: The Healing Power of Medicinal Plants, North Atlantic Books, Berkeley, CA, 2012; Healing Lyme Disease Naturally, North Atlantic Books, Berkeley, CA., 2010; Witchcraft Medicine (with the co-authors, Dr. Christian Rätsch and Dr. Claudia Müller-Ebelin), Inner Traditions, Rochester, VA, 2003; Shiva: the Wild God of Power and Ecstasy, Inner Traditions, Rochester, VT, 2004; and Culture and Horticulture: a philosophy of gardening, Bio-Dynamic Press, San Francisco, CA, 1979, 2000.His most recent book is called A Curious History of Vegetables. He is frequent guest on German, Swiss, and Austrian television, and has also appeared on the BBC.