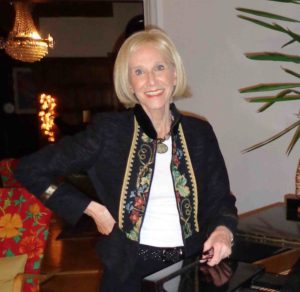 Helena Margareta is a direct descendant of a historical Swedish family, where for centuries many women were known for their extraordinary wisdom, courage and unique spiritual insights, giving these remarkable women powerful political and social positions already during the Middle Ages – at a time when this was not usually done for women.

She now very much represents her heritage and feels she has a mission to help the world, in particular the women of the world. Her message is very clear and to the point, particularly directed to today’s active and often socially challenged women. Her presentations are extremely powerful and effective, directly channeled through her heart.

Helena Margareta didn’t choose her present career – it chose her. It was meant to be. Many say her events are life changing and most have reported a greatly improved quality of life and increase in productivity and awareness after they have attended her events.

Helena Margareta is a licensed minister and holds a Doctorate of Divinity degree from UBU/USA. She divides her time between her practices in Europe and in the United States. When in the U.S she makes her home in Florida.

As Helena grew up, her surrounding recognized her intuitive abilities early on, but she herself never knew she was born with a gift and chose to ignore it. She instead chose the glamorous and happy-go-lucky life style of an international socialite and business woman. As years went by she slowly began to experience spiritual visions and messages. She did her best to avoid them but eventually she couldn’t resist any longer. After years of doubt and resistance and many startling spiritual experiences, she went through a gradual spiritual awakening. Not until recently did Helena Margareta, “wake up” and finally begin the career for which she was predestined. She didn’t choose her present career – it chose her. It was meant to be.

As she grew up, she chose a different route for her life. She decided to continue her academic studies abroad- in warmer climates ( since she never liked the long winters of cold and darkness of her home country ), in spite of all the extra trouble learning new languages and traditions. After her studies she married and married again and again and soon turned into an international jetsetter, mingling with all the famous personalities of the world . She became active in the corporate world, the world of charities and the arts and for a long time chose to leave her spiritual abilities behind.

But her life changed and soon her heart opened up and she became aware of her spiritual side and what was the true purpose of her life. She welcomed her new reality as her life turned around and she went in a completely new direction.