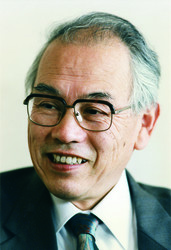 Dr. Kazuo Murakami is one of the top geneticists in the world and Professor Emeritus at the University of Tsukuba, one of Japan’s leading research universities. In 1963, he obtained a Doctorate of Agricultural Chemistry from the Graduate School of Agriculture at Kyoto University and then became a researcher at Oregon Health & Science University. In 1976, Dr. Murakami started as assistant professor at Vanderbilt University. He was appointed Professor of Applied Biochemistry at Tsukuba University in 1978 where he began genetic research. In 1983, he decoded the human enzyme renin—a hidden factor behind hypertension—which won him international acclaim. In 1990, he won the Max Planck Research Award. In 1994, he became director of the Tsukuba Advanced Research Alliance Center at the University of Tsukuba. In 1996, he was presented with the Japan Academy Prize in recognition of his achievements.  He currently heads the Foundation for Advancement of International Science Bio Laboratory, a recognized authority on biogenetics.

In 2007, famous Japanese film director Tetsu Shiratori made a film on the life story of Dr. Murakami, with a collection of interviews with a holistic health pioneer Deepak Chopra, M.D., a cell biologist Bruce H. Lipton, Ph.D., a journalist and a prolific researcher on human consciousness Lynne McTaggart, Bother Keshavananda from Self-Realization Fellowship, Hirohide Yanase, CEO of Environmental Consciousness Research Institute, and Professor Masakazu Tanatsugu, M.D., from Kyoto Prefectural University of Medicine (see:http://officetetsushiratori.jp/pg222.html). Although they are from different fields of specialties, they share very similar views on how the act of prayer influences physical bodies. The frontier science has reached a point to prove not only the effects on human bodies but also the significant connection between the state of human consciousness and the geomagnetic field of the entire earth.

The film is called “Inori” or “The Power of Prayer”, and the film asked whether it was possible for Inori (or prayer) to “turn on” genes?

Dr. Kazuo Murakami, has embarked on a scientific journey to unearth human actions’ possible impact on human DNA. His study has already proved laughter can activate certain genes, and now his study further extends to love, joy and especially prayer’s effects on DNA.  In 2006, he published an very profound and interesting book entitled, “The Divine Code of Life:  Awaken Your Genes and Discover Hidden Talents”… (see:  http://authors.simonandschuster.com/Kazuo-Murakami/41127282)