(Please scroll down for Ted’s interview with Susan)

Susan Liberty Hall, former Playboy bunny and author of Ha, I Laugh in the Face of Cancer and Scented Adventures of The Bouquet Sisters in Fairyland. She healed herself from cancer with a Native American formula. Her brother, LA Lakers owner, Jerry Buss, also had cancer and chose conventional treatments, his suffering and untimely death, inspired Susan to write her book in his honor.

“I wish to offer those in need, a most profound cancer protocol that saved my life, without a doctor, or insurance, and for less than $150 per month. In April of 2012, I was diagnosed with breast cancer, and at the same time, my brother, the late Dr. Jerry Buss, owner of the Los Angeles Lakers was diagnosed with cancer of the abdomen. Jerry chose conventional cancer treatment, with surgery, aggressive chemo and radiation treatments. I did not have a mastectomy, chemo and radiation, because I did not believe they would save my life. In fact, I felt they would end it. I went into prayer, and asked God, ‘What could I do to save my own life?’ In that moment I was divinely guided to stand up, walk over to my office and open a file marked ‘cancer,’ that I had placed there 15 or 20 years before. I had forgotten all about it. There was a flyer for ‘Two Feathers Healing Formula’—an American Indian Herbal Remedy. Here was the answer to my prayer! I ordered a jar, and began an immediate protocol, taking two capsules each day internally. I was assisted by Robert Roy, the distributor of the formula; his website can be accessed here: www.healingformula.net ‘

“HEALING OCCURS! Within 14 days, one of the two marble sized tumors in my breast had collapsed. Three days later, the second tumor also collapsed. I placed some formula on the tumor site, and it opened a wound, and I could see the tumor. Fourteen days later the tumor actually fell out. It was the size of a silver dollar, and the depth of 10 quarters. Underneath, there was another tumor! Every two weeks another tumor fell out, until 18 in all had been released. I never got an infection, and the wound closed up by itself. It was painful, and I took medication to help me. I had an AMAS blood test that revealed the cancer was disappearing, and in a few months I was cancer free, and remain so today.’ 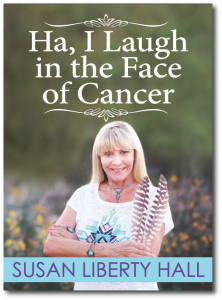 “As I was getting better, my beloved brother continued to get worse, and after a major surgery that included an “error,” there were more eight more surgeries and procedures to fix it, but the error was never corrected. He died on Feb. 18, 2013 after horrendous suffering. It broke my heart. It is my mission now to share my victory with any one who would like to duplicate my success. That is why I have written my book, Ha, I laugh in the face of Cancer.’

“For those who may think that this protocol is just too easy, too inexpensive and too effective to be real, I would just ask you to consider this. If it is ‘proof of life’ you need, well, here I AM!’