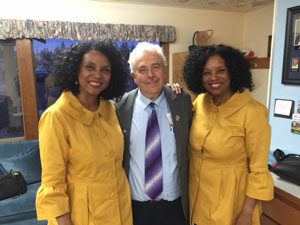 Both Shurlene and Earlene gave a presentation at my recent Galactic Wisdom Conference in Olympia, Washington (April 2019) and they have an incredible story to tell!

They write, “The fact that millions of people have been abducted, with the permission of our own government is shocking to say the least. We have undergone an alien intrusion in our lives that defy the imagination. There are people like myself who have undergone alien abductions, numerous examinations, cloning, being impregnated with an alien embroyo, and so much more. My former boyfriend was abducted and raped by aliens. Whitney Striber discusses being raped by aliens in one of his videos. By the way, Whitney Striber and the late Jim Marrs endorses our work in this area. We knew Jim personally and have lectured with him on occasion.”

They continue that, “such injustices to humanity needs to be brought out to the light so that healing and forgiveness can begin. How could portions of our own government, sell us down the river, and successfully have done so for so many years. It was easy because of the secrecy and threat of death if we spoke out. It’s time to speak out .”