Please scroll to the bottom of this page for show replays

Paul Hellyer, former Canadian Defence Minister, holds one of the longest and most varied political career in Canada’s history. He was first elected as a Liberal in 1949 federal election in the district of Davenport, he was the youngest person ever elected to that point in the Canadian House of Commons. He served a brief stint as Parliamentary Assistant to the Minister of National Defence, and made a good impression. He was then named Associate Minister of National Defence in the cabinet of Prime Minister Louis Saint-Laurent. He lost his seat when the Saint-Laurent government lost the 1957 election a few months later.

Hellyer returned to parliament in a 1958 by-election in the neighboring district of Trinity, and became an effective opposition critic of the John Diefenbaker’s Progressive Conservative government.

In 1997, Hellyer formed the Canadian Action Party (CAP) to provide voters with an economic nationalist option following the collapse of the National Party of Canada. Hellyer was concerned that both the Progressive Conservative and Liberal parties were embracing globalization, and that the New Democratic Party was no longer able to provide a credible alternative. CAP also embraced Hellyer’s proposals for monetary reform: that the government should become more involved in the direction of the economy by gradually reducing the creation of private money and increasing the creation of public money from the current ratio of 5% public / 95% private back to 50% public and 50% private. Under the CAP Hellyer lost bids for a seat in the Canadian House of Commons in the 1997 and 2000 elections.

Following the 2000 election, and a resurgence for the New Democratic Party, Hellyer approached NDP leadership to discuss the possibility of merging the two parties into ‘One Big Party’. This process was furthered by the passage of a unanimous motion at the CAP’s convention in 2003. In early 2004, after several extensions of the merger deadline, the NDP rejected Hellyer’s merger proposal which would have required the NDP to change its name. Hellyer resigned as CAP leader, but remains a member of the party.

Mr. Hellyer is an advocate of full disclosure with respect to Extraterrestrials, and he says that most aliens come from other star systems, although there are some living on Venus, Mars and Saturn’s moon. There have been four species of aliens visiting our planet for thousands of years. There are between two and twelve total species of aliens. Some look just like humans, while others appear more like the creatures portrayed in popular culture. Most alien species have benevolent intentions toward humanity, although a handful have ulterior motives. One alien species, known as the ‘Tall Whites’ is working with the U.S. Air Force in Nevada and has been known to pass for humans in public. The ‘federation’ of alien species has vowed not to intervene in human affairs unless they are invited to. The federation is disappointed in the way humans have treated the planet. Alien technology is far more advanced, but has given us LED lights, microchips and Kevlar vests.

He has published numerous books including The Money Mafia: A World in Crisis (2014) 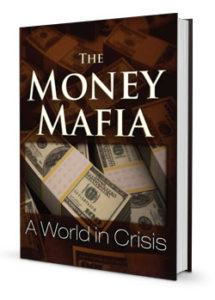 Exposing perceived fault lines in our banking and financial systems and explaining how unemployment could be cut in half in two years and worldwide prosperity restored, this book argues the existence of exotic energy sources to replace fossil fuels and consequently recommends an immediate end to fracking and offshore drilling for oil. It further urges an immediate worldwide mobilization to replace the energy source in every car, truck, tractor, ship, airplane, and house on Earth in seven years in a desperate effort to save the planet from further overheating

The book blasts government secrecy, and more than 65 years of supposed lies and disinformation, and demands full disclosure of what they know about visitors from other realms and their technology and the extent of their collaboration, including any treaties that may have been signed by them. With more than 65 years of participation in and observation of political and economic systems—beginning with the Great Depression, extending through World War II, the postwar era of hope for a better life, the Cold War, the subjugation of democracy by oligarchy, and the subtle but continuous militarization of America—Paul T. Hellyer analyzes what he believes has gone wrong with the world and its economy and suggests radical measures to introduce a universal culture of peace and cooperation