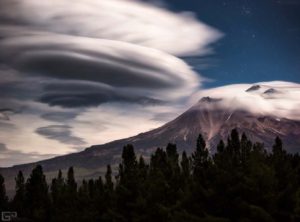 In June 2017, I took a group of people to Mt. Shasta in Northern California. Located about 275 miles north from San Francisco, Shasta has many powerful energy vortexes and contains entrances and portals to the Hollow Earth and Telos.

Considered the root chakra of the Earth, the ancient Lemurian City of Telos is approximately 100 miles beneath the mountain. We camped right next to the entrances to Telos and the Hollow Earth, and many met Adama and St. Germain. Adama is the high priest of Telos and St. Germain is a beautiful ascended master. During one meditation session, five of us went directly into Telos on the astral plane! During that session, we could feel the children of Telos running around us! It was a beautiful sunny day and butterflies sent by the people of Telos were fluttering all around us. We left white frosted cinnamon rolls for the Sasquatch one night, and by the next morning all the rolls were gone (eaten by Sasquatch, of course!).

The water of the springs at Mt. Shasta is actually water from Telos – the people of Telos tell me that the water is of very high vibration and contains many anti-cancer elements. For several nights, we watched as dozens of UFOs and ET craft soared in and out of Mount Shasta.

This show is an interview with those who came on this trip, including songwriter Angela Parker, singer Charlie Cardinal and Michiko Hayashi of the Emoto Peace Project describe their visits to Telos and their important, profound messages for humanity.

Six people who traveled in our group last year actually physically visited Telos and Shambala, the ancient Lemurian cities beneath the mountain. Other people met people from Telos on the mountain. Several people were taken aboard benevolent UFOs from the Hollow Earth. Others met Adama and St. Germain. Still others interacted with Sasquatch.

Everyone had many wonderful mystical experiences. For those of who would like to go on future trips, please email me: outofthisworld1150@gmail.com or call (509) 750-9793.