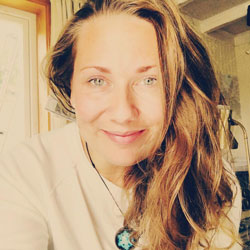 Angela Bliss Light lives in the beautiful San Juan Islands in northern Puget Sound in Friday Harbor, Washington. She is a natural healer and a psychic who helps and heals people on both the spiritual and physical level. She believes in the power of miracles.

She writes that “as a child I was always acutely aware that I was never alone.  I could feel all the supportive beings around me and I could also feel those who chose to live in the darkness.  My first memory of receiving guidance consciously was when I was 5 years old.  I was standing on my porch with an older friend who was having a hard time; she had just asked me a question that I had no idea how to answer.  I moved my attention upward and thought to myself, “I hope it happens again.”  It did happen and my young friend was comforted and satisfied with my answers.

I was first contacted by a dis-incarnate spirit when I was about 10 years old.  A young girl came to me in spirit, she was upset and confused;  She explained to me that she was looking for her older sister and her mother; they had just been in a car accident together in England.  I didn’t know if I could do anything, but I said a silent prayer asking for help and she just disappeared from my awareness.

My best friend and I were probably the only two 5th graders around who reading Edgar Cayce!  As a sensitive I was always extremely fearful of the dark, especially being alone in the dark, so I worked at closing down my connection to the other side..  As I grew into a teenager, I mostly lost touch with my gifts until I was close to eighteen years old.  At that time I had an experience of being haunted by a dark being.  The intensity of my fear is what drove me to find my power and learn to face it”.  See:http://www.angelablisslight.com/about.html

Among the spirits she channels is the late Dr. Masaru Emoto. She will be giving messages from Dr. Emoto during the show, and answering questions.  Where she lives, there is also a time and energy vortex.  We will be discussing this vortex during the show.

She is also a wonderful psychic and medium who can truly help and heal people. Her interview should be really Out of this World!