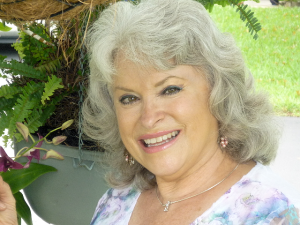 Rev. Merriam Joan Handy is a minister, psychic, and spiritual counsellor. She specializes in harmonizing mind, body, spirit, and emotions in both personal and business relations.

She is originally from a small town in upstate New York called Binghamton. It is famous because it is where IBM began, and also the home of Rod Serling of Twilight Zone, and Johnny Hart of the BC comic strip. She lived later on in Jacksonville, FL, Atlanta, GA, Miami Beach, FL, Las Vegas, NV. and even San Diego, CA, winding up back in Binghamton the last decade prior to moving down to sunny, Southeast Florida. It was definitely the sunshine that lead her there, but she has since discovered a genuine spiritual and metaphysical pocket of wonderful people where she finally decided to live in the Palm Beach County area. It suits her well!

Her one wish or dream is to awaken humanity from their sleep! She believes that right now we are on the brink of either destroying ourselves or raising ourselves into higher consciousness. Like the 100th monkey theory, it only takes a small amount of a species, all doing the same thinking and doing the same thing, to create a quantum leap of information into the consciousness of the other 98% of the species. In human form, that is about 250 million people, or the population of the United States. That’s all it takes; one mind and one concentrated action to raise ourselves up into Divine thinking from that small number of people, and then the whole rest of the world “gets it” like a big light bulb going off in their heads!

That’s her dream and she not only wants to be here to see it and experience it, but she wants to be a part of the process that makes it happen! In her own words, “Each one of us knowing the truth of our power and using for this truth and good is the key. Each one of us plays an integral part in changing the world, so let’s do it together for the better of all.”